After Recent Historic Progress, Early Childhood Education Could Be a Unifying Issue for a Divided Congress

While voter motivations behind the outcomes of the hyper-partisan midterm elections will be hotly debated over the coming days and weeks, one issue remained uniquely and overwhelmingly bipartisan on the campaign trail and in Congress over the past two years: early childhood education. Throughout the 115th Congress, Republican and Democratic lawmakers in Washington set aside the extreme partisanship dominating politics today to work together and advance historic investments and innovative policies that will increase access to high-quality early learning and care nationwide. Over the course of the coming weeks and months, the First Five Years Fund (FFYF) will help new and returning lawmakers identify areas within and across the birth-through-five continuum of care & education where they can lean in and lead.

“There has been unprecedented engagement and attention paid to these elections and what they mean for the next two years in Congress. And while pundits will spend weeks dissecting what today’s results mean for the future, our work preparing for the new Congress begins immediately,” said FFYF executive director Sarah Rittling. “Across the political spectrum and at every level of government, candidates and policymakers understand the importance of investing in our children’s earliest years. FFYF is therefore squarely focused on determining how best to build on the strong, bipartisan foundation in place at the federal level to grow even stronger support for early childhood education over the next two years. When the dust settles from this election and members of the 116th Congress are sworn in, we will have laid the groundwork to ensure new and returning lawmakers understand that early childhood education is a unifying issue that can bring them together from across the aisle.”

Moving beyond this election and in anticipation of a new Congress, there is a strong, bipartisan foundation of support and understanding among lawmakers on early childhood education — arguably the envy of any high-profile issue policy issue today. In a relatively short time, we have seen:

With this foundation in place, FFYF will work with its partners, longstanding Congressional supporters and new Members to ensure this momentum is maintained and expanded. FFYF will be launching an effort to work with lawmakers of both parties and the administration to showcase opportunities and recommendations for policy solutions to make progress on early childhood education.

Bipartisan policymakers, under Republican leadership in the House and Senate and in partnership with a Republican administration, made historic gains for children from birth through age five during the 115th Congress, achieving much of what was contained in FFYF’s 2016 framework. Key policy achievements, detailed in a new resource from FFYF, include:

Unlike many policy issues that rely on the success of one political party for their legislative success, early childhood education has made tremendous progress in Washington over the past decade under most every possible partisan makeup of power. 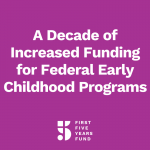 Similarly, there has been a clear understanding among policymakers and candidates at the state level that early childhood education makes for good policy – and politics. 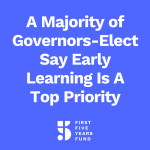 Voters consistently say they want their lawmakers to do more to ensure families have access to affordable, high-quality early learning and care. Last week, FFYF released a new report that consolidates and synthesizes the findings of its years of publicly available opinion research with that of other national and state polls – some of which have never been released publicly. The analysis of this aggregate survey data found that polling over the last decade shows quality early childhood education is a top priority issue for Americans of every political persuasion.

Widespread Understanding Around Importance of ECE

Americans understand the value of early childhood education, and they believe it is essential to provide all children with a strong start by aiding in their early physical, intellectual, and emotional development. This largely stems from an overwhelming arsenal of scientific research showing the benefits of high-quality early learning opportunities – particularly for children from low-income families. During the first few years of life, a child’s brain is at its most flexible, making this a critical period for learning and growth. Waiting until kindergarten is too late—children who receive quality early education demonstrate greater cognitive and socio-emotional development than children who do not.